The Thermal Infrared Sensor (TIR) is one of the latest sensor produced by Dexter Industries. It is able to measure the temperature by detecting the radiation emitting from the object. The amount of infrared radiation emitted by an object increases with temperature, thus the TIR is able to measure these emitted radiation. You should read up a little more on Thermal Imaging (Thermography) to have a better concept on how it works. Here is a picture of a Thermal Image, captured using very expensive thermal imaging equipment, NOT our TIR sensor. However the concept is the same, it captures the emitted infrared radiation, and converts it to an image.

Here I have a simple program that takes the value from the TIR sensor and output it to the NXT display. Please note that if you are using NXT Education software, the units is in Celcius, while the NXT Retail software is in Kelvin instead.


The following is what I have tried to measure:-
Emissivity is a measure of a material’s radiating efficiency. Theoritically only a black body will have an emissivity of 1, thus almost everything else we measure is should be less than the actual temperature as it should have a emissivity value of less than 1. Check the emissivity list here. Please note that human skin has a value of 0.99.

There is a special block that Dexter Industries have produced to modify the emissivity value for the objects that you'll be measuring.

Here I have made a very simple software to measure the temperature of objects while the vehicle is moving. I have used the Data Logging feature available from the NXT Education's software. 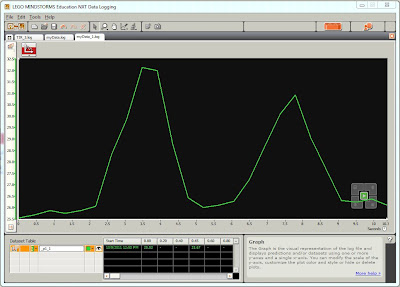 The above is the measured temperature when as the vehicle is moving along for 10 seconds. Any idea what is it?

It is actually the heat produced by both my legs as the vehicle is moving in front of me. The lowest point is about 26°C (ambient) and the peak temperature is about 32°C (my legs).

I have written an equivalent for those that don't own the NXT Education's software. The above NXT-G equivalent writes the temperute to a text file as the vehicle is moving across. 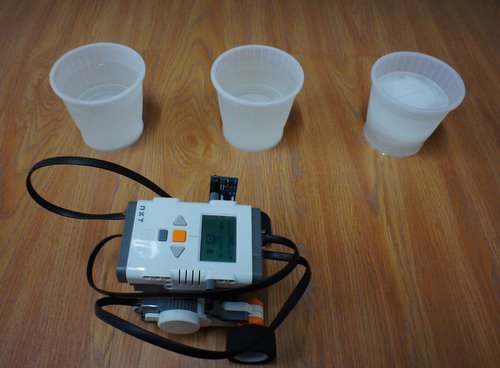 Here is a simple experiment that I had devised. The first cup on the left is hot water, the centre is room temperature and the last cup is actually a frozen cup of water.

The above is the data that I have received from the text file data, and then using excel, I have plotted the data using a colour scale. Please note that the actual measured temperature of the hot water was about 75°C (using thermometer) while the ice is 1°C (using TIR on ice directly). However when measured from the side, the temperature seems to be off by almost 10°C. I'll have to check the emissivityof these plastic cup and retry the experiment.And note that the centre cup didn't show up, because it was at room temperature!

Overall the TIR sensor is pretty good and sensitive. It is able to pick up my body temperature even when the ambient is only about 5°C different within 10" of distance.


I will be posting some of the NXT-G software up in the next few days as well as do a few more experiments.