NXTintro Workshop with Nicholas and Victor 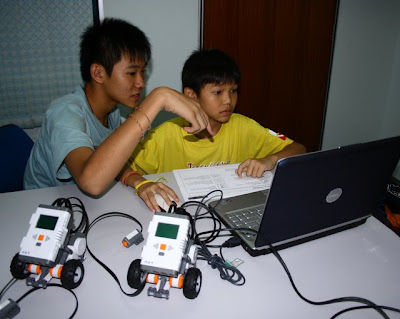 It was another successful day for me. Two students attended my NXTintro Workshop on the 3 June 2008. Two brothers in fact. Their age was about 12 and 15 years old with zero experience with Lego or NXT mindstorms. 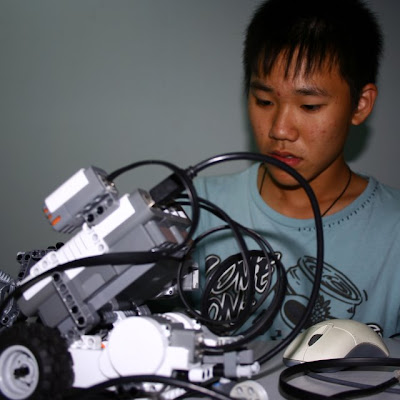 The day started with introduction to Lego Mindstorms. At first, they didn't know what to expect of our workshop. So I took out a previous Bot that I had built, and with my Bluetooth phone, I controlled it. Moved it around the table. They were like... WOW.... OOO....

After that demo, the kids seems more excited than me, and couldn't wait to get started with the Workshop. 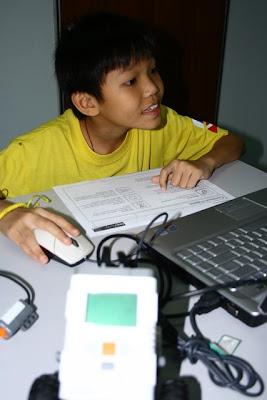 We went through some basics before I allowed them to build a Robot each. Since it was their first day, instructions were given to them. Buidling with intructions is nothing difficult to do. Within 45 mins, their basic robot for the day was built. Next came the harder part of the Workshop. The NXT-G programming portion. With little or no experience in programming, teaching them would not be a simple task.

I gave them some very simple program to do. Mostly 2-3 blocks of programming. This is to get them used to the programming environment. After a few simple task, I gave them more complicated task to complete. 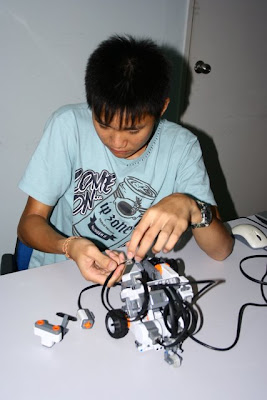 Before you know it, these kids were familiar and knew what they were doing. We continued the day by adding more components to the basic Bot as well as learn more advance programming methods.

Before the end of the day, I allowed both the brothers to have a little "competition". I gave them a task and allowed them ample to time to modify their bots as well as program it.

Overall, the class was a success with both the kids learning the about Robotics as well as Programming. The younger brother even requested that his Dad buy him a NXT set for his coming Birthday :p
Posted by Eric Tan at 12:00 am No comments: