If you have downloaded the NXT Tutorial by, please download it here.

Don't worry about the NXC guide. You'll only need the Guide if you are doing more advance programmes. Until then, just use the NXT Tutorial and follow it step by step.

I have gone through the tutorial and find it pretty complete. It goes through most of the basic features that are available in the NXT-G language.

I will start to write some more advance program and post them back here.

I will assume that you have already complete the NXC Tutorial and fully understand the basic NXC features as well as the C programming language.
Posted by Eric Tan at 10:31 pm 1 comment:

The beauty about this about the language is that, you could use the standard firmware, without upgrading your NXT Firmware. Why it is great is that you could use the more advance, while having the option to use back the NXT-G software, if you wish to do a quick test or demo without flashing your firmware back to the original one.

NBC (Nxt Byte Code) is actually a very low level coding. It is about an equivalent to assembly language. Basically you can't get lower than this!

NXC is (Not eXactly C) is a high-level C language. It is written above the NBC language.

You'll need to download 2 software to get this running.

Next please extract the NBC Compiler. Please remember the directory where the files have been extracted to.

You'll need to attach the NBC compiler so that you can access it from within the Bricxcc.Under the Edit menu, please seleect the Preference option. 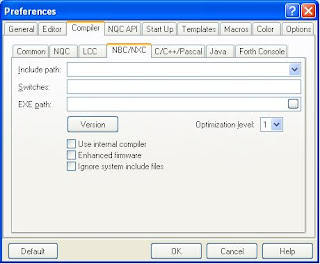 Then select the little box with the "..." and include the path where you had extracted your NXC file.

Once you have done it, please compile the file "struct.nxc" which was included in the NBC compiler.

If you have done everything as I have explained, you should be able to compile the programme and run it.

Download the NXC Guide or NXC tutorial from this link.

I will have some tutorial on how to programme in NXC in my future post.
Posted by Eric Tan at 9:39 pm No comments: