FLL 2011 Food Factor Challenge will be held this weekend. In this edition, the participants were given shorter preparation time as the competition will be held earlier. The previous editions of FLL were held after Chinese New Year.

Nevertheless, both school teams under our watch, Light Warriors (Sekolah Sri Suria) and LEGO Logic (Sekolah Sri Cahaya), are busy doing final preparation for the competition. Both teams are under pressure to produce good results at this edition of FLL. In previous edition, both teams have won Judges Award and Rising Star Award respectively. In addition, Light Warriors had also won Best Overall Robot Design Award in FLL 2009. 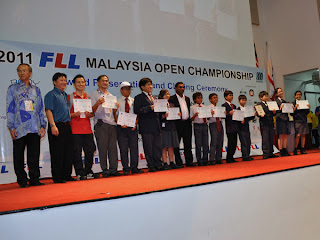 It is also surprising that there is little promotion effort by FLL Malaysia organizer, SASBADI. There is no link nor any information on FLL from SASBADI website. The official Malaysia FLL Facebook page is also inactive.
Posted by Poong at 5:07 pm No comments:

Email ThisBlogThis!Share to TwitterShare to FacebookShare to Pinterest
A "practical" robot idea you can construct with LEGO MINDSTORM - RoboShart!