What I love about LEGO is that, given similar (or even same) parts, the possibility to create something seems to be infinite. So many possible solution for the same task...

The following is more of a Photo blog, of our attempt to prototype and design a vehicle for our Moonbot mission.

We started off with trying 2 basic design 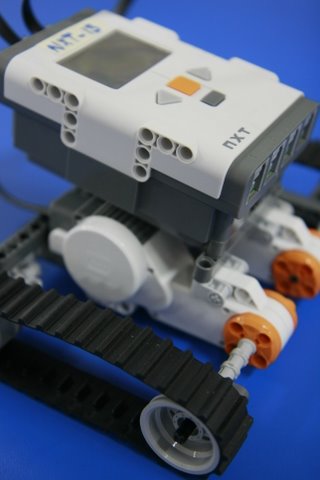 A very quick tank track based prototype done. After a few runs over the Moonbot ridges I have deem this design a little too unstable. It couldn't get over the ridge consistently, most of the time either falling on its back before going over, or falling head first after it has gone over the ridge. 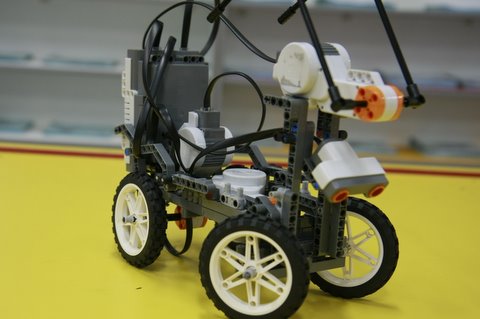 This was one of the first car based prototype that the kids had produced for me. It worked fine and was able to traverse any flat terrain properly. However the turning circle was bad.... really bad. With this design, we too had difficulty crossing the ridge, as it is tail heavy (note the NXT is behind the back drive wheel). Told the kids to move the NXT to between the 2 drive axle, giving it better balance. 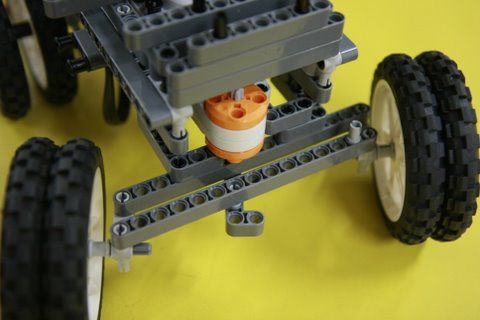 The front steering wheel mechanism is really simple (anyone knows the name of this design?). It is just motor connected directly to the steering arm. No rocket science. Simple and effective.... However this design does have a tiny flaw.... it is difficult to get a good turning accuracy, as well as the terrain and ridges sometimes pushes it out of alignment. 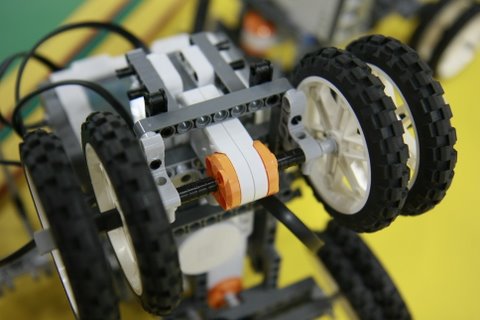 The driving motor is connected to the drive axle directly. This design is able to push maximum power without any gears (speed or torque design). Simple and effective. However the trade off for this design is that it doesn't allow the car to turn properly (inner wheel is slower than other wheel).

We did a redesign it and tried it with a differential drive train. It worked very well when the vehicle is on flat terrain and when it is turning. However when faced with uneven terrain as well as Moonbot ridges, sometimes when all traction was lost to 1 wheel, thus transferring all the energy to the other wheel, causing inadequate traction and power to cross the ridge.

I reckon if we could try a limited slip differential, it could work. However with complicated design, it also could mean that the vehicle could be more unreliable. We decided not to try that design and just stick with the simple design and work within the limitations. 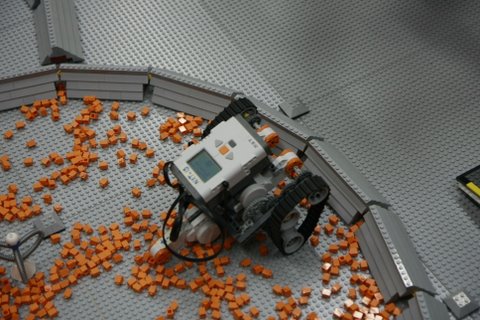 Here is a photo of another design of our tank track based vehicle. The student added some gearing, for it to power all the drive wheels, as well as added some counter balance to the robot. It did have great torque and was able to climb over the ridge easily, however the balance was difficult to overcome, causing the vehicle to constantly fall over the ridge. 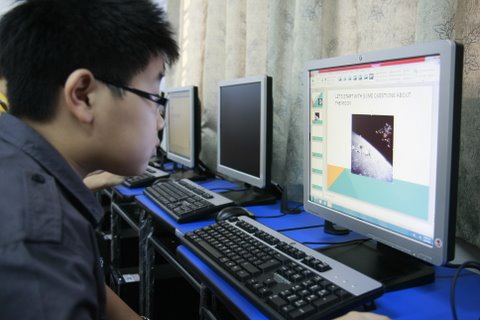 While the some of us were killing our brain cells trying to figure out the best possible design for our vehicle, other students had the opportunity to do research and prepare for their STEM out reach project. The STEM out reach is worth a whopping 40% of the total, so getting this done properly was essential to the overall score 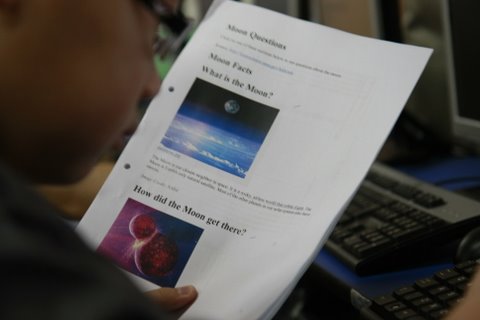 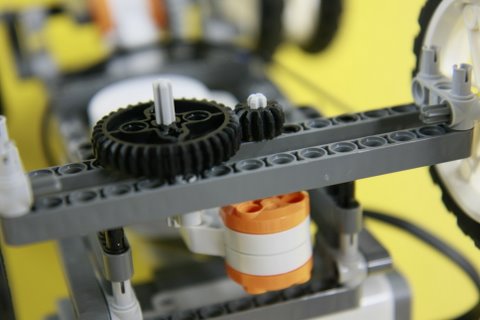 We decided to add a torque (speed down) gearing to the front drive arm. This makes the turning a little more accurate (but slow reaction), at the same time making it harder for the drive arm to mis-align when it hits the ridge or the uneven terrain. 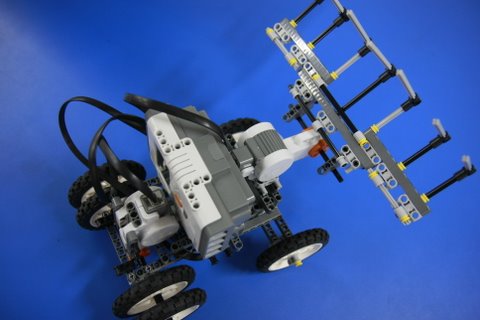 One of our first working prototype with the NXT Brain moved to the centre for better balance and a new rake style arm for grabbing the objects. We experimented with this design. It was able to move over the ridge quite consistently, however the heading direction wasn't that consistent due to the uneven ridges pushing (mis-aligning) the vehicle steering arm. 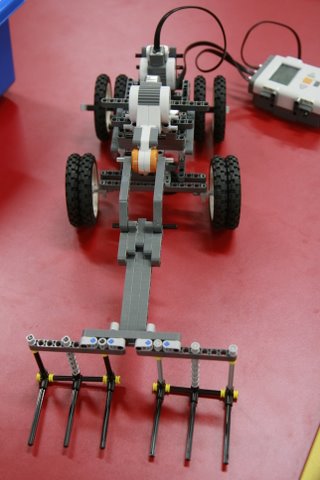 Here is another prototype of a long reach rake style arm for trying to grab the objects from a further distance. The idea is NOT to go into Cravin Crater as it would be near impossible to leave it when you are within it.

Overall over the 2 days that I spent with the kids, it was great. We had many brain storm sessions, prototyping most of the designs we wanted to try and then decided which was the one that should be used. It was good as it wasn't my duty to dictate which is the best direction of building the best vehicle but give the opportunity to the kids to prototype, trial and decide.
Posted by Eric Tan at 8:59 pm