I cannot believe the last post in this blog was more than a year ago...time really does fly. I wished everyone had a great Christmas last year & a great start this year. I had a rather long break during the Christmas holidays and as usual I spent some time to work on some Technic/Mindstorms models, so I built this: 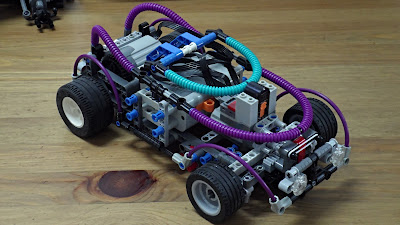 This Power Functions car was built primarily based on Snow White by Jaeho Jung and Sariel's The Unofficial LEGO Technic Builder's Guide. The PF car is modular in design and it is basically divided into 3 main modules:

The drive module is the same as the one designed by Jaeho Jung, with an overall gear ratio of 1 : 3.75

The chassis module consists of the PF battery pack and long beams for connecting the drive module and the steering module. 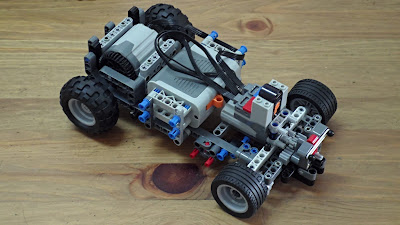 The steering mechanism is a little more interesting here, one of the biggest problem with the PF medium motor + rack and pinion setup is the inability of the mechanism to return the steering to the centre after turning to the right of left. So I incorporated a self-centering mechanism found in Sariel's book to see how well it works & I was surprised by the results - it worked really really well.
After playing with the model for a while I decided to see if I could include a differential to the drive module to see if the handling of the car would be different compared to a solid axle and here is how it looks like,

The differential did improve the cornering speed somewhat, and overall both the configuration were fun to drive around with. The power functions elements that were used in the construction are,

And for anyone who wants to improve their construction technique in LEGO Technic/Mindstorms, I would strongly recommend grabbing a copy of Sariel's The Unofficial LEGO Technic Builder's Guide.

I know Lego's are for kids mostly, but after seeing these Lego Mindstorms and programs that help kids learn to build them, I really want some. I think they're great and really help kids use their creativity.